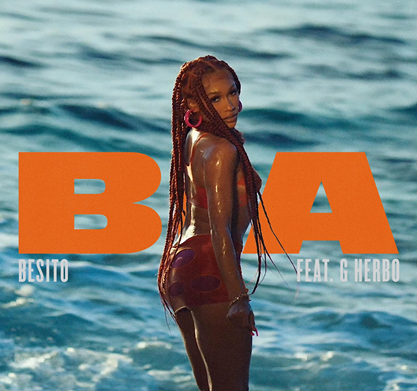 Get it HERE via Epic Records

“Besito” is a track that features BIA’s signature sound and distinctive voice, with her usual girl empowerment theme, encouraging her female listeners to think they’re all that because they are, as she exposes her accomplishments to inspire girls and women while motivating them to never settle.

This time around, BIA opted to give us a deeper look into her universe as an Afro-Puerto Rican and Italian artist raised in Massachusetts switching from Spanish to English with sharp and witty verses in a new, contemporary hip-hop style that reflects how global her music is.

Meanwhile, in the music video, directed by Nigerian-born, British director Daps, we see BIA basking in Puerto Rico, the land of her grandparents, interacting with the people, embracing the culture, and enjoying the idyllic beaches, while looking strong and confident, aligned with the message of “Besito.”

“Besito” featuring G Herbo comes after “Whole Lotta Money Remix” featuring Nicki Minaj. The remix, which has garnered 18 million views on YouTube, came to be after Minaj fell in love with BIA’s “fresh” hip-hop and wanted to jump on the track. The original song became a viral sensation thanks to TikTok with over 275,000 streams on the platform and attracting star support from Cardi B, Kylie Jenner, Kendall Jenner, Lizzo, Lil Nas X, and many more. Premiering today is also the Savage X Fenty Show Vol. 3 where BIA is one of Rihanna’s special guests performing at the event. The iconic fashion show was filmed at the Westin Bonaventure Hotel & Suites in downtown Los Angeles, and it’s available exclusively on Amazon Prime Video. BIA will be wearing a very bright set that matches her fun and vibrant

personality that will be available for purchase after the show, and her act will not only catch your attention, but leave you wanting more.

Currently, BIA is on tour as Don Toliver’s special guest. You can catch her on her upcoming dates below:

Multi-Platinum Recording Artist BIA is known for music that possesses both biting wit and boldly authentic swag that stems from BIA’s years traveling through the Boston rap scene, later moving over to Miami, Los Angeles, and then taking over the world. With every mixtape, collaboration, and guest appearance, BIA has only amplified her reach. She dominated 2020 with a fresh new perspective: she inked a deal with Epic Records, dropped the hard-hitting “Free BIA (1st Day Out)” and the intoxicating “COVERGIRL”, as well as dove further into the fashion world with a feature in Good American’s Spring 2020 campaign and Missguided x Sean John Fall 2020 capsule collection.

By the end of 2020, she dropped her For Certain EP, armed with the hit single “Whole Lotta Money”—a song with a central message that unlimited currency can be both mental and physical. The EP reached the Top 10 of Billboard’s Heatseekers Album Charts, and “Whole Lotta Money” became an undeniable force, due in part to its continuous viral success on TikTok. The track has jumped right off the platform and into streaming stardom, marking its territory in the Spotify Viral 50 Chart as well as the Global Spotify Charts and earning her a nomination for “Best Breakthrough Song” at the 2021 MTV VMAs. In addition, BIA’s reimagined version of her hit song “Skate” was featured in the 2021 Stanley Cup Playoffs tune-in promos on NHLNetwork, NBC and NBCSN in the U.S., Sportsnet and TVA Sports in Canada, and across the NHL’s social and digital platforms.