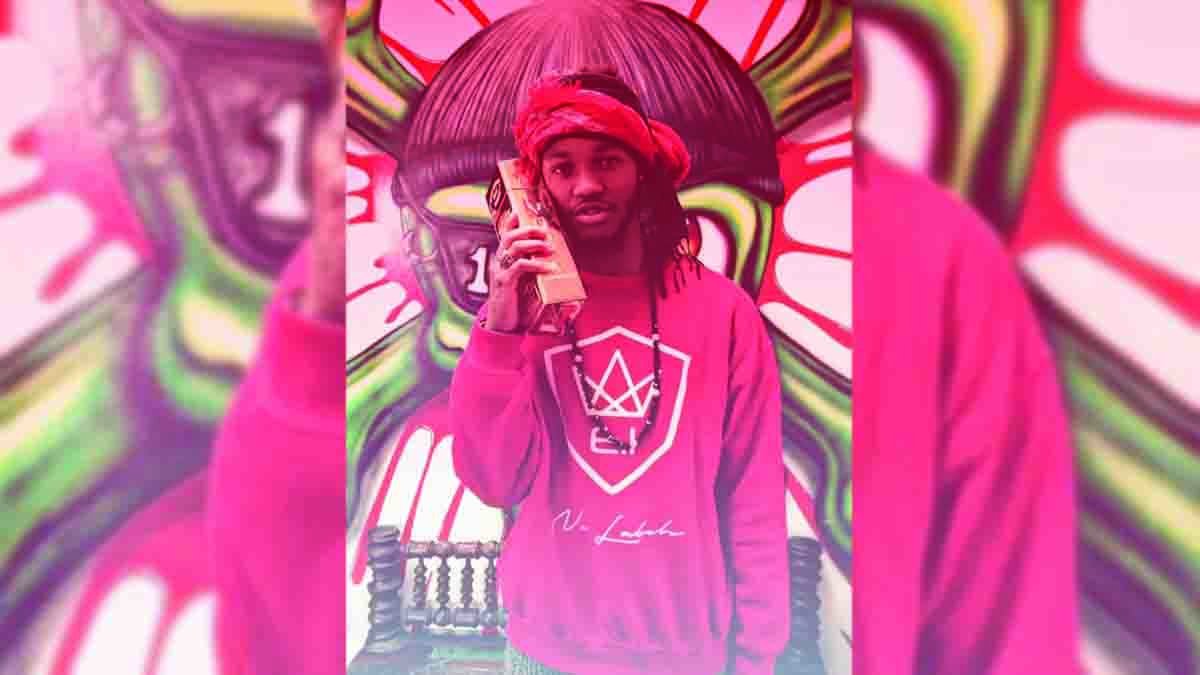 Cyffa was born in Lynchburg, Virginia and adopted in Virginia, Beach. At 3 years old the Virginia-Native was adopted into a wealthy strict household. Straight out of High School Cyffa Leyenda signed with Alisha “M’Jestie” Brooks (Song Writer of RIHANNA Pon De Replay & more. After a year and half Cyffa was released off the label because M’Jestie felt he was going to be much bigger. Month later Cyffa connects with Michael Copon former Blue ranger in time force also featured in scorpion king 2 & more. Cyffa was a street dancer in Michaels artist Vickie Jade music video “Walls”. The next day Cyffa and Michael reconnect for the last time and Michael tell Cyffa he sees something special in him but isn’t going to tell him what he sees because he wanted Cyffa to figure his own journey out for himself.

As Cyffa grew his expectations did not go along side his parents in result he was kicked out at 18. In 2015 Cyffa opened up for Rah Digga at Shakas Live bringing an enormous amount of energy through-out the crowd. Later on that year Cyffa performed at S.O.B’s “Where Legends Are Made” in Manhattan, New York City and THE NORVA w/Lex Luger, BIG WILL THE PARTY KING, Jolley Brothers and more. SOBs NYC was a paid trip, paid luxury hotel, food provided and Backstage access free from the founder of the LiveWire Ent. This was Cyffa’s first time in NYC and lived it like a star. 2018 Cyffa had hit single ran 150k streams on soundcloud and not to mention opening up for Megan Thee Stallion.

When it comes to music Cyffa’s focused and isn’t the type to give up. Cyffa is like a Virus that can’t be contain once he’s on one thing he’s going to be featured on another. Consistency plays a huge part in Cyffa’s life. He feels the only way to succeed is to market every little information about his entertaining world. Cyffa this year will recieve a plaque of his hit record FINETO along with becoming Head A&R / Merketing Rep at Stackin’ Up Entertainment and Auther of RedxMagazine. This year is a big year for this extravagant Libra and he plans on bringing the world together.

Where did your love for music come from?

My foster Father would listen to 50 cent, Young Joc, Ludacris and Nelly a lot every-time he’d pick me up from school. One day I was listening to Candy Shop and it had me repeating the lyrics made me feel like a rapper myself. A few Pharrell and Snoop Dogg songs inspired me along side Bow Wow, Lloyd and Omarion. I miss the dancing and vibing music in the early 2000’s. To me the 2000’s was a legendary era of music for me. I feel Like music found me. I was into basketball then all of sudden I’m rapping and making beats. A lot of times people like to tell someone yo your not made for this but those that know when they’re chosen know.

One of my favorite songs produced by Kanye west himself is Flashing lights. Kanye’s graduation album helped me get through middle school. Wiz Khalifa’s Cabin Fever’s, Rolling Papers, Kush & Orange Juice and Star Power and Drake’s “Come Back Season”, “Thank Me Later” & more got me through highschool. Back in highschool Current Hiphop, Hot New HipHop and some soother sites you’d find some classic tyga songs like Don’t wake me up from “Black Thoughts 2” which people didn’t know that Tyga would put some of his hits on the mixtape first before putting it on the album so if you listened to his mixtapes first you already know the song before it came out lol.

Drake was known for that like the song by Tyga “Still Got it” ft Drake was on current hiphop then months later came out with a music video. Young Money in my personal opinion especially since I grew up in that era is the reason why we need that real music today. Young Money came out and every song had a feel to it and it was real and unique. It was like every artist had they own shine and popularity. But yea “Still Got it” That’s one of my favorite underrated records that didn’t get marketed correctly like drake should’ve been in the video. But yea I love music man the creativity behind it always. Lloyd was also my favorite artist growing up. “Get it Shawtey” is one of my all time favorite record along side “All Over the World” ft Lil Wayne. One of my other all time favorite records is Pharrell “That Girl” featuring Snoop Dogg. Still till this day on repeat. Another one is Trey Songz “Replacement Girl” featuring Drake. I have so many records that brought me inspiration to do music as to why I’m still creating today.

What have you been up to since the pandemic started?

It’s crazy because when the pandemic started my beautiful daughter was born as EGYPT QUEEN GRANT. I name all my kids great names my sons name is JEHOVA KING GRANT. But during this covid craziness I then took a step further into the music industry networking with people already in the game. My whole life I’ve been planning for this demonic and God like industry of Bad and Good. Learning the business side saved me as I connected with over 50+ verified / celebrity influencers which I only worked with 3 so far as the ones I worked with we have more records coming too. I haven’t been outside doing nothing but strictly staying home studying how I want to move, how other people I might want to work with move and how this business really operates.

A lot of scammers and hackers tend to be verified users and at the end the day you start to realize you don’t have to be on television to be in the music industry the music industry is all around you. The world is so small you start to notice people around you own these magazines and corporations that main stream influencers utilize to promote their material. Meaning you can be independent just find something to make you some money and your in the game easy. For the past 5-7 months I’ve been promoting for a lot of artist on Instagram, Spotify, SoundCloud, Google News Publictions towards building a bigger audience for myself as well. One of my clients just charted #55 on iTunes utilizing my Apple Music campaign service on March 19th this year. Still today he’s growing organically and gradually and hasn’t paid for almost a month now. So yea I’ve been helping artist along with helping myself reach my goals that I was always questioning about. Now that I took it upon myself to find my own answers things are starting to look like I’ll never need a label.

I always have to listen to a beat first the music has to speak to me in order for me to tell a story. Once I start I keep flowing easy. In the studio some songs might take longer than others like if the song is all about energy it’ll take me just one hour to record the record cause that’s where I know it Most powerful at. If I have to be a lyrical writer it’ll take me a week to write because of my perfection mindset but in the stu it’s much easier because when I write to something I’m always memorizing my lyrics. If it’s hype I can just write it in the studio and lay it down within minutes easy.

Do you remember that moment in life when you decided to pursue music full time?

Yea my first time I tried pursuing music I wasn’t all the way focused. More focused on and thinking staying around a lot of women was gonna get my music out there independently. I’m a male a whole lot of women posting my music I thought it would go somewhere back in 2015-16. Today I’m taking my music very serious and what I wanted back then I’m picking up the lost files from the ground now as I know more about how and where to get what I want from this music game.

Having more connections for yourself and having knowledge with it is just a bonus. I Remember last summer in the hospital when my daughter was born thinking how am I going get my name out there more is a memory that’s always in my head as to why I’m grinding everyday today. I literally was telling my self Cyffa this our last try and I need to give it my all. If I have to be on time, be available for every phone call or someone need something marketed I’m always going to be available and ready to give the best customer service or be the best I can be with in this career I want to be in.

What inspires you to keep going?

What keeps me going is accomplishing my own goals and knowing I did only makes me want to continue my success. There’s many success routes that you can take yourself. It feels much better opening up your own doors and the move you made goes smoothly.

Is there anything you want to let your fans?

Not much I have so much music and been so busy trying to perfect my craft as to why I’m always ghost but I’m working harder than ever from today on regardless of what situation I’m in because we only have one life to live until the afterlife.

What’s next for you, and where do you see yourself within the next decade?

I like to move quietly I have huge huge placements coming soon. My next record is huge “SEE ME” featuring Choyce Cincere (Prod. MB SALONE) Distribution by EMPIRE powered by Stackin Up Entertainment. I’m cooking up a Cyffa Leyenda, Dela Wesst & YUNG Smilez record soon produced by JBanga Beats. I’m literally the next level Dj Khalid but I rap. I love bringing huge acts together on my records then push it for greatness. In the next decade I see and know I’ll have a crib, nice whip, cashapp lit, bank lit, life lit, kids growing and happy, hopefully a wife smoking and chillin continuously making hits and helping artist rise for greatness like me.